Private 5G networking has been discussed a lot over the last year. Engineers and installers are getting trained on design, installation, and support. Though it’s not exactly a new topic, it is still fairly exotic. It’s like we’re all kind of waiting for CBRS to take some big, meaningful step forward that signals “OK, it’s really finally here. Really, like for real.” With Celona’s latest news, that big step has arguably just been taken.

Back in February of this year, I pondered on the past and short future of CBRS in this blog. I’ve gotten to know Celona (the private mobile network company) up close and personal at Mobility Field Day events last year and in 2020 and through a number of private briefings. From where I sit, the entire CBRS and Celona thing has been kind of a slow simmer- waiting for things to break open and get real.

Celona is ready to rock and roll the CBRS-hungry enterprise crowd with all the makings of a build-it-yourself 5G networking solution. The details are here, but the short version goes like this- product components of Celona’s integrated solution architecture include:

Celona RAN: Indoor and outdoor CBRS LTE access points built for Enterprise environments. They provide up to 25K indoor sqft and 1M outdoor sqft of coverage. Radio functions are fully automated via Celona software with their power level and frequency channel assignments in the CBRS spectrum, no manual configurations required.

Everything you need to build your own private 5G environment.

Celona has also formed a partnership with Aruba networks, who will sell Celona gear where a given customer is looking for not just Wi-Fi but also private mobile networking. Given Aruba’s lofty position in the WLAN space, this is a good thing for Celona as they set out to conquer this new market.

A Fat Wad of Series B Funding Never Hurts

Not that further validation that Celona is doing things right is needed, but one could argue that the cash the company has just secured is another indicator that industry is taking both Celona and their new tech solution seriously.

There are some decent folks at Celona that I’ve known in different roles at other companies, and it’s exciting to see them move their collective vision forward. I’m looking forward to seeing how this unfolds for Celona, the fledging CBRS industry, and for the customers about to go down this road.

About a month has gone by since I sat in a conference room at Fortinet HQ out in Sunnyvale during Mobility Field Day 4. As I review the presentations my fellow delagates and I saw first hand, I realize just how much information Fortinet’s Chris Hinsz put in front of us. Though the this was Mobility Field Day, it’s getting harder to cleanly slice off just the wireless parts from almost anyone’s product lines. With Fortinet, we not only saw the whole enchilada,  but were treated to the entire Big Hombre Combo Platter.

Fortinet is always an interesting visit, for me. The company’s networking product line and architecture always piques my interest, never having been a Fortinet customer. It’s not uncommon to sit at the competition’s offices and sometime just feel utterly smothered by market-speak, licensing paradigms, and gratuitous complexity.  I never get that vibe at Fortinet. At the same time, the Fortinet offerings feel complete, well thought-out, robust, and not lacking in anything- like they figured out a way to do what the other guys are doing without feeling the need to puff it up in all the wrong places. They must be doing something right as even though we didn’t talk much about it, Fortinet is growing and building a new HQ.

Back to the Mobility part of this Field Day event. We did get a look at Fortinet’s starting 802.11ax/Wi-Fi 6 wireless access points:

And we learned of their radio flexibility: 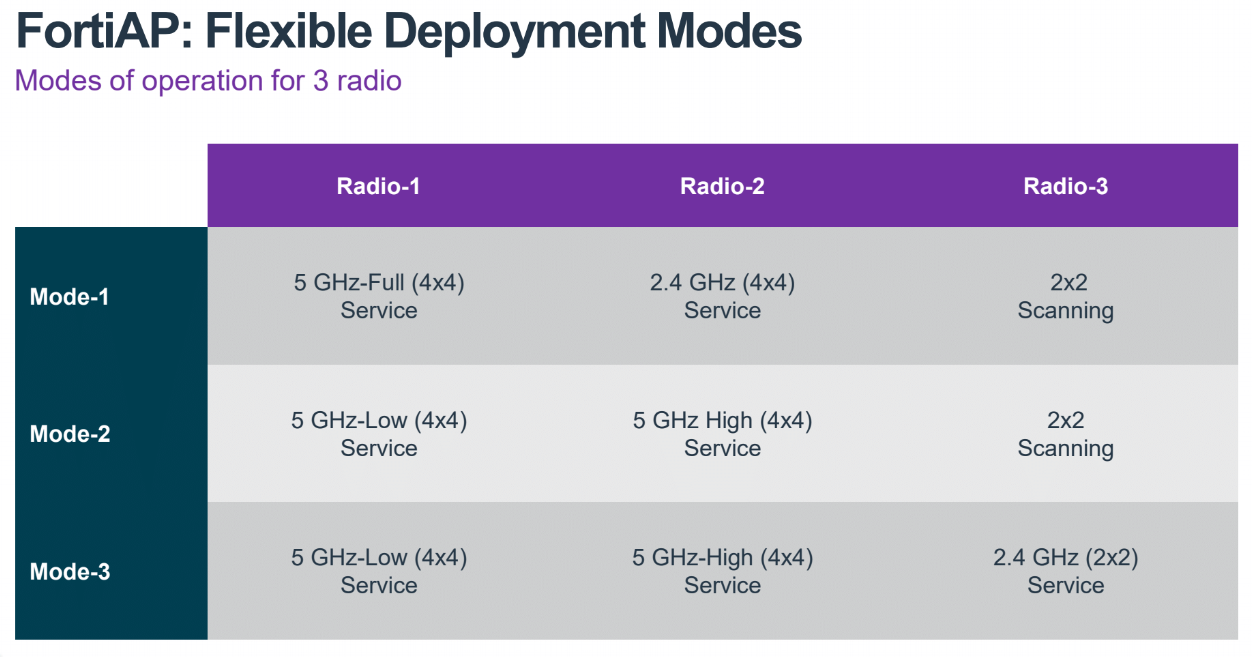 There’s a lot more here to consider as well as Fortinet looks towards the 802.11ax world that is coming soon. We got into new multi-gig FortiSwitches to connect those APs to, various management and control options, and a tiny taste of hundreds of features added to the latest FortiOS version. Then there is IoT Security, RF Management, SD WAN and sooooooo much more.

Fortinet is and always has been about security, so it wasn’t surprising to hear about a couple of innovative new tools in the mix to round out an alrady impressive solution set: 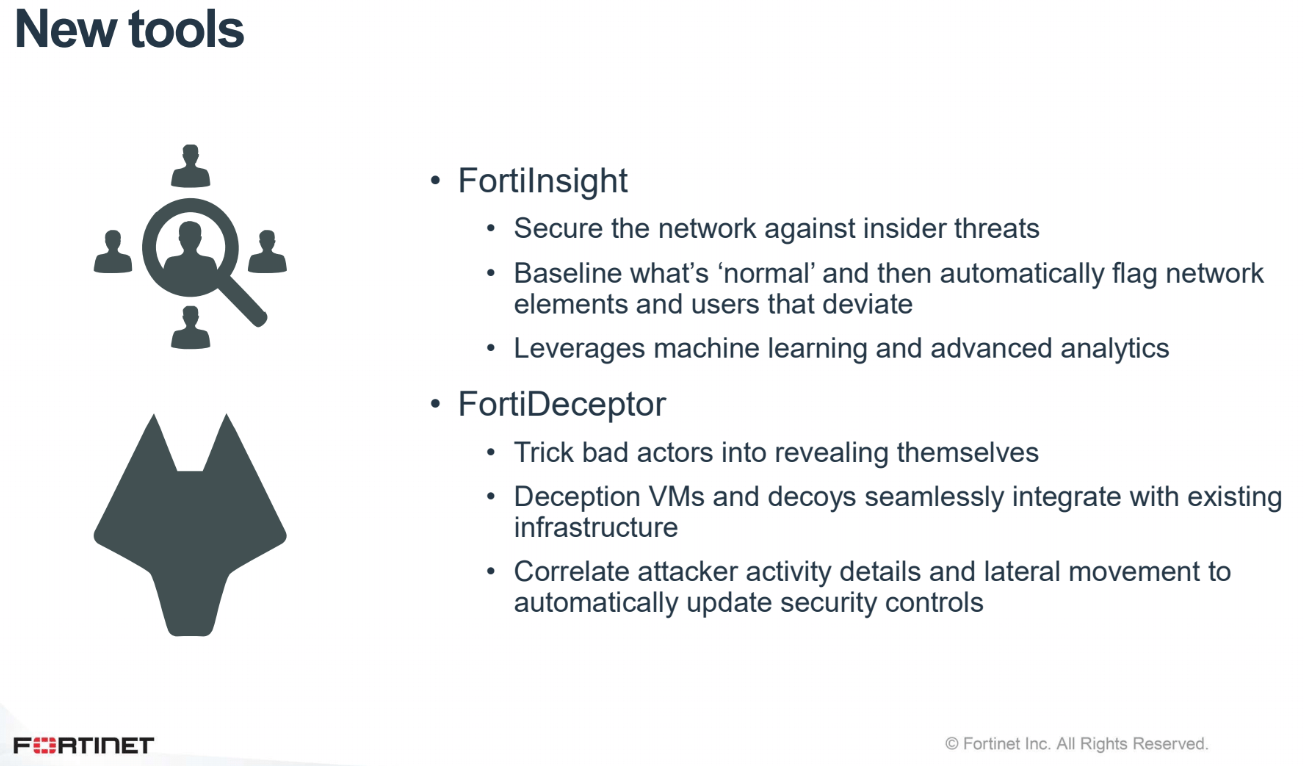 And the story just gets bigger. There is way too much to capture in a single blog, and so I recommend watching the recorded presentations from MFD4.

On a personal note- if you ever get a chance to talk with Chris Hinsz, make sure you take the opportunity. He’s just a genuine, wonderful guy to spend a little time with. It doesn’t matter if you’re talking technology or life in general, you can’t not feel good after hanging with Chris.

It’s always refreshing when a truly original story comes along in the WLAN world. Mist Systems isn’t quite brand new (I wrote about them for Network Computing back in 2016) but their approach is fresh enough to cause some good energy in the room when you do get the chance to hear a briefing from the company’s top dogs, and I recently got that chance again at Mobility Field Day 2.

Here’s the thing about Mist, now- today: if you’re not careful, their story can sound like another one of the many from network vendors where terms like AI and Machine Learning are bandied about like the Buzzword Flavors of the Month. But Mist was talking this language well ahead of the current curve. Where established vendors are largely painting their long-running gear up in a coating of hype and APIs, Mist is actually new magic built by data scientists and proven network visionaries. It’s heady, exciting stuff.

But can Mist make a legitimate go of it as new player in the Big Customer Kickball Game where most current potential customers have already chosen a side? Here, only time will tell as Mist’s marketing paradigm is put to the test. I can share my own opinions and gut reactions from the Mobility Field Day for you to consider, and welcome any dissenting opinions or comments:

I really enjoyed what I saw and heard from Mist, and it’s obvious that the company’s leaders truly believe in their baby’s potential. And- you don’t just have to hear my opinion… form your own after watching the Mist MFD session here.