Let’s get right to the cliche, as it’s unavoidable: good things sometimes come in small packages. Netool.io proved that a few years back when they introduced the original version of their feature-packed pocket-sized network analysis and support platform, and now with their Pro version I guess we can say BETTER things also come in small packages.

Netool.io is a small US-based company, and I have been following them since Day 1. They are responsive to customer requests, quick on the support response, and quite active in their development. The visual on the original white version, then the no-slip grip black, for reference:

The quick value proposition for those not familiar: using Android or iOS apps, you connect to Netool.io via it’s built-in Wi-Fi, then rapidly demystify a slew of network goings on ranging from the config parameters of the Ethernet port you are connected to, overall information on the connected switch, key network performance indicators and more. The original feature set is detailed here.

With their initial offering, Netool.io proved that a legitimate piece of network support gear could fit in your pocket with room for your phone left over. Now, the company takes it up a significant notch with Netool.io Pro. The visual: 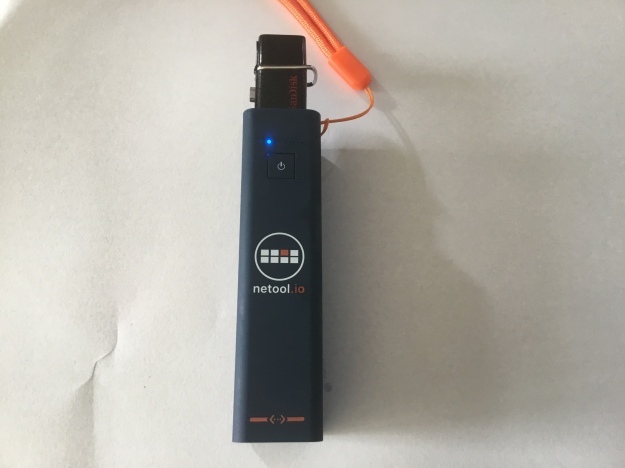 Note- the USB drive is NOT included, but I’m showing it connected as I was doing packet capture on my Netool.io Pro. That is one of the many features that came from the Standard version, and it worked very well in my test environment as part of the new platform. So what was added in Pro? The official feature overview is here, but the short version is configuration and automation interactions with network switches on an impressive level. From IF/THEN templates that can be imported and exported to other Netool.io devices (for supported switches) to log gathering and views to other configuration automation capabilities, the little Pro version looks to make it’s mark in an industry that is thirsty for labor saving (and error reducing) automation. It’s impressive to see this sort of capability in the Netool.io on top of everything else it can do, and the company has managed to make the UI fairly intuitive throughout- even for the more complicated operations.

There is a lot here to take in, but this video will help you to understand all that has been added in the pro edition:https://www.youtube.com/watch?v=jkGhYP_qWL0

Here are the current supported switches, with more to be added as updates hit:

One wonderful thing about Netool.io: you buy high-function, fairly priced products, get a slew of features and capabilities (including Netool.cloud remote share if you choose to use it) without the headache and nickle-dime licence-heavy mentality of other toolmakers.

If you are in the business of network support at all, Netool.io should be of interest to you. And if your duties include switch configurations and automation is on your radar, the Pro version is definitely worth looking at.

Did you happen to see the PR on the Microsoft Surface Pro 3?

As I look around at the many computing devices I have in my immediate vicinity, I see other models that have already started chipping away at the TRADITIONAL laptop’s tenure, like these:

For the record, that’s an iPad, a Chromebook, a Nexus 7, and a MacBook Air. Nary a one of them has an Ethernet port…

This is where some of you are thinking “Lee, you’re daft. Microsoft is touting the Surface Pro 3 as a laptop killer, not an Ethernet killer”. And though you’re right on that point, there is a nuance here that should be appreciated.

There’s a certain significance to Microsoft trying to “kill” laptops with it’s new tablet (of course, you need to buy the add-on keyboard if you want to actually put bullets in the gun that will do the killing, in this case). Why? Well, because for the last several computing millennia, Microsoft has gotten fat off of it’s operating systems running on… wait for it…laptops! With the messaging that accompanies the Surface 3, MS is saying “we now commit our client access future to the tablet.” And tablets don’t have Ethernet adapters.

And not much else. Though desktops and thin clients typically are connected via Ethernet, they certainly don’t have to be as there are a range of wireless adapter options in this space. And if Microsoft fulfills its (rather silly) prophecy of making laptops extinct, the list of devices that come with stock Ethernet capabilities shrinks even further. To me, when I add a keyboard to a Surface 3, it just became a laptop again. But now it’s like the Chromebook and MacBook Air; a laptop with no Ethernet.

None of this rises to the level of epiphany, I realize. At the same time, Microsoft’s message that it’s willing to contribute to the erosion of Ethernet by killing off a class of device that ships with Ethernet adapters in favor of another class that doesn’t is worth holding up to the light and contemplating. For many of us, Ethernet switches have already become glorified VLAN-capable power blocks for our wireless access points. And I personally can’t recall the last time I’ve plugged a laptop into the wall to get on the network.

History will show that The Age of Mobility and The Age of Ethernet For Access absolutely had to have had overlap as technology evolves. But it’s interesting that Microsoft is beating a drum pretty loudly that leads further away from the wire and deeper into wireless.

Whether the Surface Pro 3 sells well or not is almost irrelevant, in my mind. It’s the message that comes with it that means our WLAN environments just got that much more important to network users. This should resonate with network designers, helpdesks, and bean counters alike.

I realize I’m beating the 11ac thing up pretty good lately, but I think I finally hit on what bugs me about the way the new hot technology is being brought to market. What I’m about to describe is more of a BAN issue (BAN=BigAss Network, where APs are counted in the hundreds or thousands) and not so much of concern for smaller environments.

802.11ac is being delivered in rather bizarre (for the customer) “waves”.

And this is where I say “time out”. I’d like the WLAN makers to bear some of that Wave 2 logistical pain. And I want them to get creative to take the onus off of the customer. Here’s what I want:

Spare me the lecture that there is no such thing as 2 Gig Ethernet, and that what I’m asking for would be based in no existing standard. The WLAN industry has long since turned it’s back on standards and interoperability, which is why vendor lock prevails. Other than PoE and what comes out of the antenna (and even that can be a dubious discussion), the mention of standards is a joke in the WLAN industry as each vendor authors their own technical magic. So be it- I just want new magic and don’t care that it’s not exactly Ethernet in the middle.

I’m OK feeding this new component a 10 GB uplink that it then divvies up into auto-configured 2 Gbps AP uplinks of some proprietary protocol. Or feeding it 2 single-gig ports on my wireless management VLAN that it then magically muxes into a 2 Gbps, big powered uplink that connects via a single wiring run (of excellent quality, of course) to each AP. At that point, all of MY work was done in the closet, and I didn’t run a slew of new wires for my wireless network.

If we don’t get something disruptively creative on the wired side to go along with 11ac, pretty much any TCO discussion on new 11ac ownership presented by WLAN vendors will be incomplete at best, and poppycock at worst. I’ve seen both announced and unannounced 11ac products- and the prices are pretty steep (well, except for Ubiquit-). But we’re supposed to believe that 11ac lets us draw down the wired network considerably, and so be willing to buy into a higher premium for wireless. But… adding lots of new switchports and cabling runs (not trivial in many environments,  can add hundreds of dollars in cost to real TCO for each AP) has to be considered.

As a customer, I feel OK asking- because the customer is always right (well, except when they’re wrong). So… when will my new non-standards-based 2 Gbps mega-PoE switches arrive?