I’m sure I’m not alone in admitting that I generally love Amazon. The access to massive product variety, frequently great prices, the whole Prime feature, and a sense that you can really trust the entire framework just makes Amazon easy to appreciate. But that trust thing… well, lately I’ve had it rocked a little bit when it comes to Amazon. Here’s the executive summary:

Please note the instructions for how to engage this seller- you have to leave the Amazon framework and communicate through Gmail. We’ll go there in a bit, but also note the seller’s name “Lin.Martone”. This one has also shown up as:

and each variant has a different gmail account to go with it. On this item, there have been NUMEROUS bogus sellers that come and go, all with the same “email me if you want this” and all with a price that’s too good to be true (hence the draw). All of this has been shared with Amazon via emails and calls. In each case, Amazon agrees fraud is in play, yet it it keeps coming back.

Being a veteran of many an investigation, I decided to follow one of these out before enaging Amazon for the first time. Here we go… bogus seller here is ter.kansey@gmail.com (you’ll love the spoofed Amazon page that’s coming):

Realize- we’ve already broken Amazon’s rules here, by leaving the web framework and communicating directly. The response- a sloppy cut and paste of a reply to somebody named Shane.

Here is where it gets good- sent in my inbox, a very official looking “Amazon page” complete with bogus order number.  I have to think that at this point, many shoppers might be fooled. 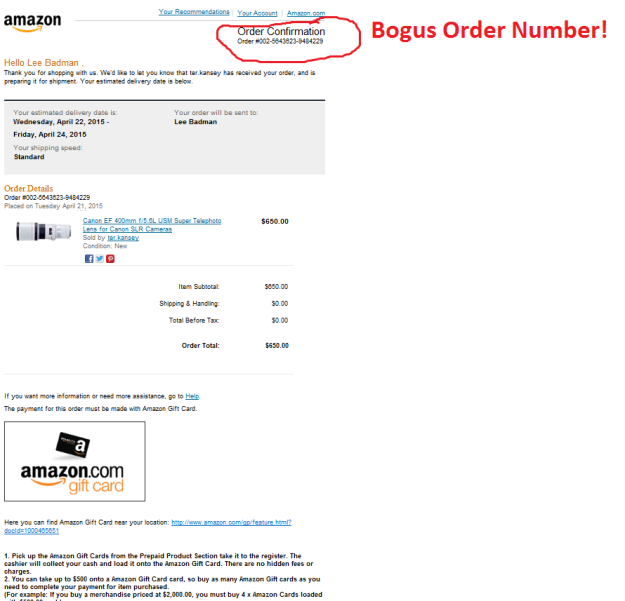 This person was trying to get me to buy an Amazon gift card, and read them the number as payment for an item that would most assuredly never come. When I called Amazon and shared this all with them, I found a number of challenges in dealing with customer service.

And that’s it. I’ll still use Amazon for new items, but am thoroughly spooked at how loose and sloppy this end of their used market is. I hope this blog can help even one person not to get scammed by what seems to be pretty common on Amazon.

ADDENDUM- Thanks, Stephen Foskett for taking this issue up on your own blog, and summarizing what to watch out for: (lifted from Stephen):

Here are the hallmarks:

Be careful out there!

148 thoughts on “The Curious Case of Bogus Amazon Sellers”